We use cookies on our website to improve user experience. By using this website you agree to our use of cookies. OK
Home > SM4 Safety Articles & Resources > After all the Industry Hyperbole, Conferences, and Congressional Hearings—Is Business Aviation Any Closer to Reliability In Aircraft Tracking?

After all the Industry Hyperbole, Conferences, and Congressional Hearings—Is Business Aviation Any Closer to Reliability In Aircraft Tracking? 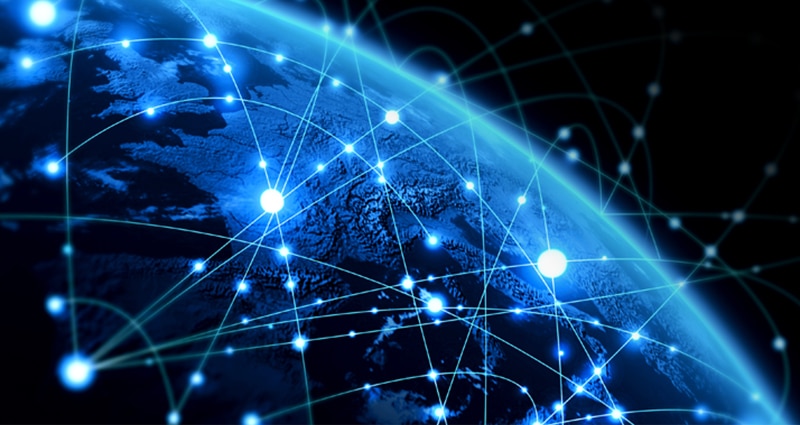 GPS in every cockpit. Drones delivering pizza. Autonomous gliders trained to find thermals on their own. With the current state of aviation technology, surely a chief pilot sitting in the office, on the go, or at home can quickly and confidently ascertain exactly where the airplanes are, right? Unfortunately, for a great many of us, CONFIDENCE is the problem, and that has many in business aviation a bit uneasy.

Consider the following scenario: While monitoring an international trip on your flight operation’s 2015 G650ER late one night, your experienced, well-trained scheduler steps away from the desk for 15 minutes to grab a cup of coffee and a snack. While she is away, the principal aboard the aircraft has a heart attack and the crew diverts to the closest airport, lands, and taxis to the FBO to meet a waiting ambulance.

No problem. Your scheduler relies upon a modern flight-tracking software platform, which will surely send an alert. Oddly enough, it did not work this time, and in fact, no alerts went off while the coffee was dripping into the cup. Instead your scheduler receives an “aircraft arrived” report from the software announcing the airplane’s arrival – at the originally planned destination. Having no reason to second-guess the report, she jots down a few notes about the flight, sends you a quick “Ops Normal” email, and heads home for the night.

In reality, the aircraft is at an airport 200 miles away from where you both think it is, and an FBO line service worker who recognizes your aircraft and principal has just set social media on fire with news of a Fortune 500 company CEO wheeled away from his airplane on a stretcher. You are about to have a long night.

Minus the onboard medical emergency, we see scenarios similar to this story (and worse) play out nearly every week in Fireside’s Emergency Operations Center, where currently over 500 business aviation aircraft are Flight Monitored. City pairs not updated by Air Traffic Control after diversions, route clearances not entered into the system, routes attached to the wrong flight leg or even the wrong aircraft, “in-flight” position reports received after “ON” reports, the list goes on and on. About once every two months, the leading tracking software programs will show a parked aircraft aloft! What is going on in this industry?

Think of all the links in the chain between the aircraft, the ground, the software, and the human… and with each link, an opportunity for a glitch:

“But we just had ADS-B equipment installed on all of our aircraft,” you say. “Wouldn’t that alleviate situations like this?” Well, unfortunately not. ADS-B position reports do not contain ATC city-pair integration data—an essential component of flight tracking software functionality that enables alerts for diversion, route deviation, and return-to-field alerts among other things.

By the way, just for fun, take a look at one popular flight tracking website’s ADS-B coverage map: 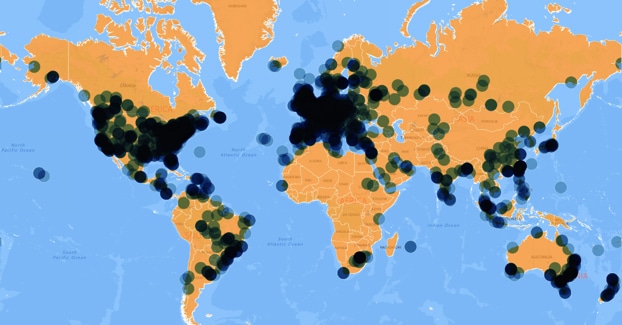 You would be right to describe that as “a bit spotty.” Mind you, this website makes use of a network of several thousand private citizens with ADS-B receivers mounted on their roofs – an asset that exponentially improves their coverage over the FAA’s. If you are inside one of the black dots, you will get some great streaming data such as trajectory, groundspeed, altitude, and so on… but who is watching it every second of the flight to assess problems?

“But we have the latest datalink service with a position reporting interval set to the industry standard of 15 minutes! Wouldn’t that help?” Not so fast.

At a cruise speed of Mach 0.85, your G650 could deviate anywhere within the circle below (an area larger than the state of Nebraska) during the 15-minute period between reports, and your dispatcher or anyone else watching from the ground would have no way of telling: 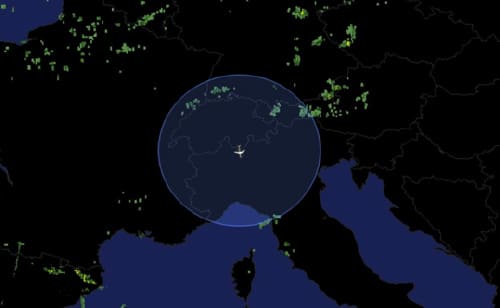 Furthermore, if your flight does not originate or terminate in the U.S. (or one of a handful of countries that share data with the FAA), an observer on the ground will not receive any data from the ASDI feed whatsoever. In that situation the only way to receive route clearances or city pair information is through datalink, a functionality that may or may not be present depending on the age and type of your aircraft and the specific model of avionics on board.

It gets worse. If you look closely, you will notice that the speed on all of your datalink position reports is marked as “0A,” as G650s with even the most modern avionics do not have the ability to include speed with the reports. How useful is a data point that cannot differentiate between an aircraft in level cruise flight and an aircraft falling out of the sky?

Whether due to avionics limitations, bugs in the FAA’s data feed, faulty software algorithms, or the simple fact that it’s hard to put ADS-B receivers in the middle of the ocean, it is clear there remain significant obstacles to accurate flight monitoring from the ground and more importantly, in-flight hazard identification. Unfortunately, it is also clear that these gaps and limitations are often present, even if your aircraft has the supposed latest and greatest technology aboard.

So what have we learned after three solid years of watching business aviation aircraft move around the world? Only when avionics manufacturers work together and alongside datalink services to develop better-integrated technology, the FAA significantly improves their ASDI feed, and software providers develop better interpretive algorithms will accurate, dependable, and useful data cease to be elusive. Until then, there is still no technological replacement for a trained aviation professional to watch, analyze, troubleshoot, and report on aircraft positioning every second the aircraft is on the move. It all comes down to what is good enough for you, your passengers, and your tolerance for risk.

Attend the NBAA 2018 Schedulers and Dispatchers Conference Education Sessions where these issues will be discussed further by Fireside Partners.

Fireside Partners Inc.
Fireside Partners, Inc., is a fully integrated emergency services provider designed to provide all services and resources required to respond effectively and compassionately in a crisis situation. Dedicated to building world-class emergency response programs (ERP), Fireside instills confidence, resiliency and readiness for high-net worth and high-visibility individuals and businesses. Fireside provides a broad array of services focused on prevention and on-site support to help customers protect their most important assets: their people and their good name.
http://www.firesideteam.com/ 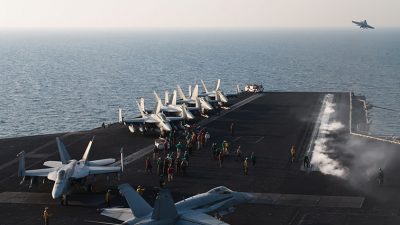 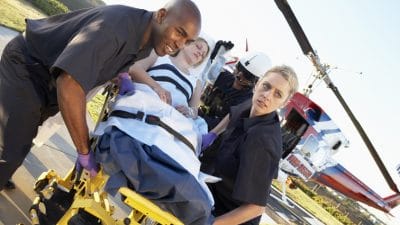 High-Consequence Decision-Making: The Data is Telling an Important Story

As an industry, we are very good at examining aviation accidents after they result in injury or tragedy. Regrettably, we fail to take advantage of the proactive learning opportunities—those found…